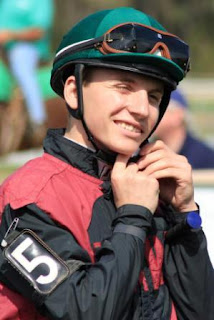 A insider’s opinions, observations and reflections about their
favorite sport
Communication is a key to any jockey’s success. When Ryan Curatolo arrived in from late in 2010 to begin his career at Calder, he taught himself English by talking back to the television in his hotel room. That enabled him to make the rounds of top stables that winter at Gulfstream, where he won 17 races as a 7-pound apprentice. By then, the teenager had established his innate ability to communicate with Thoroughbreds. Curatolo began working with trainer Patrick Biancone, who had previously helped develop top jockey Julien Leparoux. From Biancone, Curatolo learned the importance of patience, getting horses to relax, diet and a strong mental approach. His career took flight in early 2011 in , where he signed a contract to ride for Flying Zee Stable, owned by the late Carl Lizza. Despite fracturing his left clavicle in a spill in June, Curatolo won 115 races in 2011, with mount earnings of more than $4-million. In addition to winning Grade III stakes on Street Game and Pure Gossip, Curatolo enjoyed a four-victory day at , where his youthful smile became a familiar sight to grizzled railbirds. He was still 19 when he went to Churchill Downs to ride Lizza’s 2-year-old Pure Gossip in the Breeders’ Cup Juvenile Fillies Turf; at year’s end, he was named a finalist for an Eclipse Award as Outstanding Apprentice Jockey. Curatolo’s career ascent was slowed last year due to a delay in renewing his immigration papers, but he is back on track at Tampa Bay Downs, where he has ridden 21 winners through March 23 and finished in the money with 40 percent of his starters. Now 20, Curatolo has a worldly perspective from competing against the top jockeys in the country at Gulfstream and , a realistic view of the sport from nearly being forgotten during his absence last year and a pleasant, optimistic attitude that has gained a large following locally.

BEST HORSE I’VE EVER RIDDEN: Street Game, for Flying Zee Stable and trainer Philip Serpe. I won the Grade III Hill Prince Stakes with the 3-year-old colt in 2011 by seven lengths on the turf at for my first stakes victory.

HOW I GOT STARTED IN RACING: My father started taking me to Marseille Borely Racecourse when I was 4 or 5. He even sent me to bet for him when I got a little older. And he always had racing on TV when I got home. I remember waking up early to watch the Japan Cup. It was so exciting.

MY BIGGEST INSPIRATION: My father, Robert. He is a musical agent and represented Gloria Gaynor when she came to . He has a lot of talent and ambition, and I got my drive from him.

ONE CHANGE I WOULD MAKE TO RACING: More television coverage, especially on local TV.

MY FAVORITE ATHLETE: David Beckham, the soccer player. I am also a fan of many of the top boxers.

NO. 1 ON MY BUCKET LIST OF THINGS TO DO: I haven’t created a bucket list yet, but of course I want to ride in the Kentucky Derby and the Prix de l’Arc de Triomphe.

FAVORITE MOVIE: Catch Me If You Can, with Leonardo DiCaprio.

FAVORITE THING ABOUT BAY : The weather is awesome, and the grass course is perfect. When I win a race on the turf, it is even better!

WHAT ELSE I’D BE DOING IF. … I might be a boxer. There are so many things to do.

ADVICE TO SOMEONE STARTING IN RACING: Be focused, work hard, and treat everybody with respect.
Posted by Tampa Bay Downs at 6:41 AM