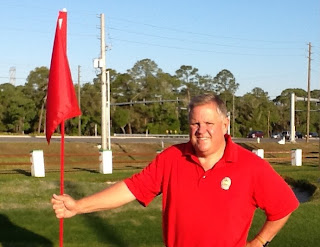 A insider’s opinions, observations and reflections about their favorite sport

The past month has been a whirlwind for Class A professional Jon Johnson, Manager of The Downs Golf Practice Facility since its opening in March of 2003. In February, Johnson conducted the third annual Golfest Presented by Tampa Bay Championship, which attracted more than 3,000 participants over two days. In addition to overseeing daily operations, Johnson has been planning for the 10th anniversary celebration of the golf driving range and practice complex, which draws more than 35,000 visitors a year, on March 23. He also gave away daughter Kari’s hand in marriage March 16 in a ceremony at the racetrack. Johnson, the past President of the West Central Chapter of the North Florida PGA, was honored as the chapter’s Professional of the Year for 2012 and received the President’s Plaque for his contributions to the growth of the game. Before arriving in , Johnson was an assistant professional at Augusta National in , site of the Masters, and ran the in He has been married for 32 years to Kris, a registered nurse at . As proof that pedigree is often as important in golf as in horse racing, Johnson’s son Kyle is an assistant golf superintendent at East Lake Golf Club in , site of the PGA Tour’s annual Tour Championship; previously, Kyle was an assistant in training at Augusta National. In addition to Kyle and Kari, who is an elementary school teacher, the Johnsons have another daughter, Beth, a student at the . The fully-lighted Downs Golf Practice Facility, which ranks among the top-100 ranges in the United States, features 45 all-Bermuda grass hitting stations; two full-size chipping greens; an 8,000-square foot putting green; and a covered range area. Johnson and fellow Class A professional Matt Mitchell offer private lessons, and the facility provides adult and junior clinics and a junior summer camp program.

BEST HORSE I’VE EVER SEEN: Secretariat, when he won the 1973 Belmont Stakes. I also saw the movie. Hearing how Jack Nicklaus cried watching him win the by 31 lengths – Jack was overcome by Secretariat’s magnificence – proves his greatness.

HOW I GOT STARTED IN RACING: I was managing the in when I heard through the grapevine Tampa Bay Downs was building a range. I sent my resume to (track Vice President and General Manager) Peter Berube, and I was off and running pretty quickly.

MY BIGGEST INSPIRATION: My late father, Carl Johnson. He was a dentist and a town leader, and he was someone I could always look to as an example. He gave me the drive to keep going and taught me how to treat people.

CHANGE I WOULD MAKE TO RACING: I would like to see some night racing. I think it would attract a different crowd and give people who work a chance to enjoy the sport.

MY FAVORITE SPORTS TEAM/ATHLETE: The Chicago Cubs will always be my team. Once you are a Cubs fan, you never leave. My favorite players growing up were third baseman Ron Santo and outfielder Billy Williams. Later, my favorite athlete was Michael Jordan. He would come to his golf center and give clinics, and he was always very nice. Tom Watson, the champion golfer, would be a close second.

NO. 1 ON MY BUCKET LIST: Take a family trip to and play .

FAVORITE TV SHOW/MOVIE: Duck Dynasty is the hottest show on TV. My favorite movie is Close Encounters of the Third Kind.

FAVORITE THING ABOUT BAY : Watching the horses train early in the morning – just the beauty of it, the horses silhouetted against the mist.

WHAT ELSE I’D BE DOING IF. … I’d be in the marketing field.

ADVICE TO SOMEONE STARTING IN GOLF: Strive to become a PGA member, and work at as many facilities as possible to widen your experience.