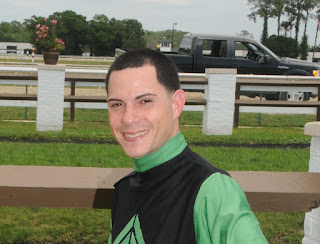 A insider’s opinions, observations and reflections about their
favorite sport


Angel Serpa doesn’t mince words when discussing his career goals. “I want to stay healthy, keep going and one day be in the same position as John Velazquez or Ramon Dominguez,” the 25-year-old Serpa says. “I want to be a Hall of Fame jockey.” Thus far, his ambition is matched by his insatiable desire to acquire knowledge from many of the sport’s best. Starting off at (now Parx Racing) in 2009, he received guidance from Tony Black and brothers C.C. and Carlos Lopez. As an apprentice at Aqueduct in 2010, Serpa absorbed insights from Hall of Fame member Edgar Prado, even retrieving Prado’s discarded program from the trash can at day’s end to study the veteran’s notations and comments. In his second season at Tampa Bay Downs, Serpa credits Daniel Centeno, Willie Martinez and Scott Spieth, among others, for their guidance. Serpa, who finished third in the jockey standings here last season with 72 victories, is neck-and-neck with Centeno for the top spot this season. Serpa also leads the local colony this season with three stakes victories; last year, he won the Grade III, $150,000 Tampa Bay Stakes and the $75,000 Florida Cup Turf Classic on Roman Tiger and the $100,000 Gasparilla Stakes on Salad Girl. Born in , , Serpa was a finalist for an Eclipse Award as Outstanding Apprentice Jockey in 2010, when he won 105 races and amassed earnings of almost $3.5-million. Serpa is married to fellow jockey Carol Cedeno, who is 15th in the current standings with 15 victories. They have two children: Angelica, 4, and Dylan, 1 ½ (Serpa’s oldest daughter, 5-year-old Emmaries, lives with her mother in ).

BEST HORSE I’VE EVER RIDDEN: Speak Logistics, who I rode in the Grey Goose Breeders’ Cup Juvenile last year at Santa Anita and in the Sam F. Davis Stakes for trainer Eddie Plesa, Jr. I rode him when he broke his maiden at Monmouth last summer, and when he won the Florida Stallion Stakes In Reality Division at Calder. I knew from the first time I rode him he was different. He is a smart horse that will do whatever you want.

HOW I GOT STARTED IN RACING: I always was around horses in , from the time I was a young boy. When I was 18, I went the horse racing school in Canovanas, which is where I also met Carol. A friend introduced me to trainer Javier Gonzalez, and he brought me to , where I won my first race.

MY BIGGEST INSPIRATION: My family, and my kids. I like my job and I want to do well for them.

CHANGE I WOULD MAKE TO RACING: Raise the scale of weights for jockeys. I don’t have too many problems, but it’s not nice when you have to go to the hotbox for an hour. You’re not always as strong as you should be.

MY FAVORITE SPORTS TEAM/ATHLETE: The New York Yankees and Felix “Tito” Trinidad, the former world welterweight, junior middleweight and middleweight boxing champion from . I played second base when I was a kid, and I train with Daniel Santos, the professional champion boxer.

NO. 1 ON MY BUCKET LIST: I’d love to go skydiving. Jumping from that high would be amazing.

FAVORITE THING ABOUT BAY : The weather and the turf course. The turf course here is flatter than a lot of tracks, which helps you keep position, and it is always in great shape.

WHAT ELSE I’D BE DOING IF. … If I wasn’t a jockey, I would be a barber. I cut my own hair and some of the other jockeys,’ like Jose Angel Garcia and Victor Santiago.

ADVICE TO SOMEONE STARTING IN RACING: Stay focused on doing your job, no matter how much money you make. Listen to the older jockeys, try to respect everybody and don’t make the same mistake twice.