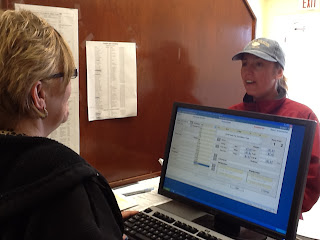 A insider’s opinions, observations and reflections about their favorite sport

Too many would-be jockeys arrive at the track expecting to get a leg up and start winning races right away. That’s the belief of Paula Bacon, who thinks more riders need to learn the sport from the ground up to prepare for a career in the saddle. “Everybody wants to get on horses right away, but no one wants to do the lower-level jobs – hotwalker, groom, assistant trainer – and that is the only way you learn right,” says Bacon, the agent for Ronnie Allen, Jr., and Ricardo Feliciano. The native knows from experience. Bacon worked as a hotwalker while in high school and was a groom, exercise rider and pony person before embarking on a successful career that saw her win more than 500 races. A serious back injury forced her to retire at 30, but from 1994-2001, Bacon might have been the most popular jockey at Tampa Bay Downs. She teamed with late trainer Don Rice for many victories, including one with 16-1 shot Guardianofthegate in the 2001 Columbia Stakes on the Tampa Bay Downs turf. Bacon – the daughter of jockey Johnny Bacon, who died in an auto accident when she was 5 – admits it was tough to stop riding. “I never dreamed I’d be quitting that soon. It was scary, and it was traumatizing,” she recalls. “You lose your routine – working horses, being in the jocks’ room, the camaraderie with the other riders. I missed being in the limelight. I was kind of like a celebrity who can’t get a movie role.” But she wasn’t down for long. After working as an agent for jockeys Bobby Walker, Jr., and David McFadden for two years, Bacon turned to training, first for veteran horseman David Walters, then for Richard Englander, who won back-to-back Eclipse Awards as Outstanding Owner in 2001-02. Another trainer, Wayne Catalano, also sent her a few runners. Bacon’s early lessons paid off on the backside; from 2004-10 she won at better than an 18-percent clip, her horses earning more than $2.7-million. One of her horses – a mare named Afleet Angel bred by Don Rice’s son, Brett, and owned by Brett’s wife, Lori – won stakes at Presque Isle Downs and Turfway in 2008, the latter with Bacon’s former riding rival and ex-boyfriend Willie Martinez in the saddle. When it became difficult to find owners a few years ago, Bacon returned to being an agent. “I miss training because I love to be with horses, but I’m very happy with what I’m doing,” Bacon said. “Ronnie has not changed at all since I first got to know him as a jockey almost 20 years ago – his attitude, his work ethic, the way he talks to people – and he and Ricardo are humble guys who are a pleasure to work with.”

BEST HORSE I’VE EVER RIDDEN/TRAINED: Guardianofthegate was the best horse I’ve ridden. I won four races on him during the 2000-01 Tampa Bay Downs meeting, including the Columbia Stakes. As a trainer, Afleet Angel won both stakes for me when she was 8. She even finished third in a stakes for me at when she was 9.

HOW I GOT STARTED IN RACING: I was born into it. With all the influences around me, I knew I was going to be a jockey when I was a little girl. No two ways about it.

MY BIGGEST INSPIRATIONS: My mother, Susan Bacon, and (retired jockey) Mary Bacon, my dad’s first wife. My mom, who lives in , did everything on the racetrack, from grooming to ponying horses to training. I told her I was going to be a jockey when I was 5 and she told me it would be a hard road, but she was always there for me. We were never rich, but I never needed for anything. I looked up to Mary Bacon because she was pretty and flashy and riding in big races just when women were starting to be jockeys. She was like a movie star to me, and I aspired to be like her.

ONE CHANGE I WOULD MAKE TO RACING: Lessen the reliance on casino revenue at the racetracks. They are taking racing out of the game. In my opinion, Tampa Bay Downs does it the right way, with an emphasis on horses and the sport.

MY FAVORITE ATHLETES: I’m not sure if I have a favorite, but I always enjoyed watching Shane Sellers ride and patterned myself after him, his style and his decision-making. Pat Day was another jockey I admired. I loved watching Holy Bull run. He had a regal look and a real presence about him, almost an arrogance.

NO. 1 ON MY BUCKET LIST OF THINGS TO DO: Travel to and see all the wildlife.

FAVORITE MOVIE: Gone with the Wind. I never get tired of watching it.

FAVORITE THING ABOUT DOWNS: (Racing Secretary) Allison De Luca and (Stakes Coordinator) Gerry Stanislawzyk. They are very agent-friendly and make my job a lot of fun.

WHAT ELSE I’D BE DOING IF. … I would be a journalist or a TV personality. They used to bring me up to do the paddock show at (in ), and I always felt comfortable.

ADVICE TO SOMEONE STARTING IN RACING: Start from the smallest job and work your way up. And go to college first, so you have a backup plan.