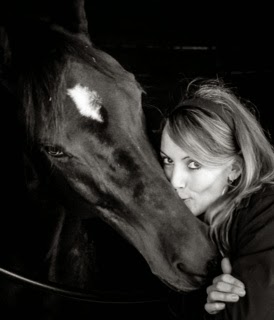 On a recent Tuesday afternoon, criminal defense attorney Vanessa Nye unwinds from a high-energy workday in the company of her 9-year-old gelding, Diamond Steal, at nearby Half Pass Stables. Nye – who raced him during his 5, 6 and 7-year-old seasons – takes riding lessons on Diamond Steal, one of five Thoroughbreds she has campaigned under her Voodoomon Racing banner. Two of the others are active: Spanish Ambassador, an 8-year-old mare who won an allowance/optional claiming sprint at Tampa Bay Downs on Feb. 13, and Doimakeyahappy, a 5-year-old gelding who was second here on March 1 in a 1-mile turf allowance. Nye also owns 8-year-old Spanish Comedy (pictured above), who broke her maiden in 2010 at Tampa Bay Downs under jockey Daniel Centeno; the mare resides at her birthplace at the Webster Training Center near Ocala while Nye looks for a stallion to breed her to. Another successful Nye charge was Supah Soup, a now-10-year-old gelding she raced for four seasons, winning six times from 41 starts with eight seconds and eight thirds. Although retired from racing, Supah Soup still is active at Tampa Bay Downs, and within that story resides the essence of Nye as an owner. The gray son of 1996 Breeders’ Cup Classic winner Alphabet Soup, out of Grade I winner Supah Gem, is a pony horse during the races, under the care of Nye’s close friend Genevieve Londono. “I was fortunate to find a second career for him,” Nye said. “He has a job escorting racehorses out in the afternoons, and I get to see him six or seven months out of the year.” Four years ago, Supah Soup was part of a defining moment in Nye’s involvement as an owner that inspired her to take an active role in racehorse rescue, retirement and aftercare. A member of the board of directors of TROT (Thoroughbred Retirement of Tampa, Inc.), Nye speaks out in the latest installment of the track’s “Racing In The Sunshine” blog.

I BELIEVE THAT RETIRING THESE HORSES PROPERLY, transitioning them into other careers and supporting the aftercare of these great animals is paramount for the racing industry’s future. I think for a long time, people assumed every Thoroughbred would be fine after they retired. In recent years, we’ve learned that isn’t always the case, and the issue is getting a lot more attention. None of us in the industry – breeders, owners, trainers, jockeys – would have the chance to enjoy this sport if it wasn’t for the horses. I think it falls on the industry as a whole, but specifically the owners, to have a plan.

MAY 28, 2009 SHOULD HAVE BEEN ONE OF THE MOST HEARTWARMING days of my life, but it was tragic and bittersweet. I had two horses running in a starter allowance at Arlington in Chicago: my 7-year-old gelding Voodoomon, who won six races at Tampa Bay Downs, and Supah Soup. They were both in contention when Voodoomon broke down entering the stretch. Supah Soup won by a head, but Voodoomon’s injuries were so severe, he had to be euthanized. What a crazy twist of life and fate. It was a very emotional, heartbreaking day, but I became a stronger person and it made me more impassioned to love and care for my horses.

MY FIRST RACEHORSE, AFTER I GRADUATED FROM LAW SCHOOL at the University of Florida, was Voodoomon. A good friend, Will Knight, approached me about going into a partnership, and there were 10 of us altogether. I had grown up going to the races with my father and I was in awe of the beauty and grace and power of the horses. Voodoomon was the love of my life, and after we lost him in a claiming race at Monmouth in 2005, I claimed him two years later for $10,000 at Remington Park in Oklahoma; soon thereafter, I would become the sole owner of all of my horses.

SUPAH SOUP IS ANOTHER ONE OF MY HORSES I guess I have to admit I couldn’t let go. (Trainer) Dale Bennett is always looking to improve his stable, and at the start of Supah Soup’s 5-year-old year in 2009, Dale claimed him for $5,000. I guess he heard through the grapevine how disappointed I was to lose him, because he agreed to sell him back to me at no profit, provided he could continue to train him. That was fine with me. I have a ton of respect for Dale and Denise, his wife. They are knowledgeable horse people who care deeply about the aftercare of their horses.

IT TOOK ME A LONG TIME TO COME TO GRIPS WITH LOSING Voodoomon. I’m still not sure I’m over it. To honor him, I changed the name of my stable to Voodoomon Racing, and I began sponsoring a memorial race named for him every year at Arlington. I also vowed that every year, I would rescue a racehorse off the track that wasn’t in the best hands or getting the best care and needed to be retired, or one that was being over-raced. And for the past five years, I’ve taken a horse I never owned off the track and retired it to give it a chance to be retrained. I also donate to the rescue and retirement organizations affiliated with the tracks I race at. This, to me, is all part of Voodoomon’s legacy.

ONE EXAMPLE OF A HORSE I HELPED RESCUE IS CURRAGH MON, a son of Maria’s Mon who broke his maiden as a 3-year-old at Tampa Bay Downs. He raced three times at Fonner Park in Nebraska last year, and shortly after that, his former owners contacted me because they had lost track of his whereabouts. I must have made 100 phone calls, but with the help of other concerned horsemen, we were able to locate him. I agreed to pay $2,500 for him and foot the expenses to bring him back to Florida. Summer Thurber at the TROT foster facility in Myakka City did a tremendous job transitioning him and teaching him a new discipline, and he has a “forever” home now in Christmas, Fla.

TAMPA BAY DOWNS IS MY HOME TRACK WHERE I RACE my horses half the year, and being on the board of TROT helps me bring my philosophy to the group while working to get the support of other horsemen. The goal is to facilitate helping as many horses as we can when their racing days are over. As an industry, we have to make sure there is life after racing. I understand how people can get in over their heads; it’s expensive to care for horses, and it’s not like finding a home for dogs. But I’m not going to discard any horse because it is no longer racing. They are living beings, and as their owner I have signed on to be responsible for their welfare.

I WOULD LOVE TO HAVE A FEW MORE HORSES, BUT right now I know I can only manage the ones I have. I will never own more horses than I can afford to take care of after their racing careers. Even if you give a horse away, you have to maintain a watchful eye because things can go awry and the new owner may find they cannot afford to keep it. I want them all to have fabulous lives when they leave the track. Diamond Steal, my riding horse, got very sick toward the end of his career with pneumonia, but I wanted to save him and sent him to the University of Florida equine hospital and he recovered. I’ve been riding him once or twice a week for the past year, and it’s been a wonderful learning experience for both of us.

ONE OF TROT’S GOALS IS TO GET THE LOCAL HBPA (Horsemen’s Benevolent and Protective Association) to support us and help fund our aftercare efforts. If there are horses in need and we can’t take them, we try to find them another home through other retirement and rescue programs. We do a lot of work with Florida TRAC (Thoroughbred Retirement & Adoptive Care), the program that is affiliated with Gulfstream Park and Calder. If TROT is full and we see a horse that has raced in south Florida that needs help, we can call them. Galloping Out, the retirement program in Illinois, does an excellent job. I think all the rescue and retirement programs need to work together, and I think horsemen everywhere need to do whatever they can to show support.

THERE IS NO QUESTION IN MY MIND OUR INDUSTRY NEEDS to improve its public image. A lot of people have misconceptions about how much the majority of owners love and care for their horses, but without viable aftercare and retraining toward second careers, racing runs the risk of turning people away. Too many people look at racehorses as a commodity, and they don’t really care about their welfare once they don’t have the potential to make them money. It is one of the worst things I can imagine – a horse that has earned its owner hundreds of thousands ending up in a bad place.

I’M PROUD OF BEING A FEMALE IN THIS INDUSTRY, proud of being a sole owner and proud of the relationship I have with my trainer, my groom, my hot walker and my exercise rider. It’s a family, and we all work together to be successful. Jim McMullen has been my primary trainer since 2008, and I have had a ton of success with him. We share similar beliefs – the welfare of the horse is always No. 1, even after they are done racing; their happiness and health comes first; and the sport needs to take steps toward becoming medication-free. Jim has a lot of patience and kindness, and he will board horses himself if they need a temporary home when their racing careers are over. Our philosophies mesh, and my horses are doing well because of the care he gives them.

ARLINGTON PARK HAS BEEN VERY SUPPORTIVE OF THE RACE to honor Voodoomon, and I fly to Chicago for it every year. Last year they suggested I enter one of my horses, so we put Doimakeyahappy in the race. He won by a couple of lengths, and it was one of the most gratifying experiences I’ve had in racing. In the winner’s circle, I felt Voodoomon’s spirit shining down on us, and it gave me even more strength to pursue this path. My next short-term goal is to win my first stakes race.
Posted by Tampa Bay Downs at 12:50 PM