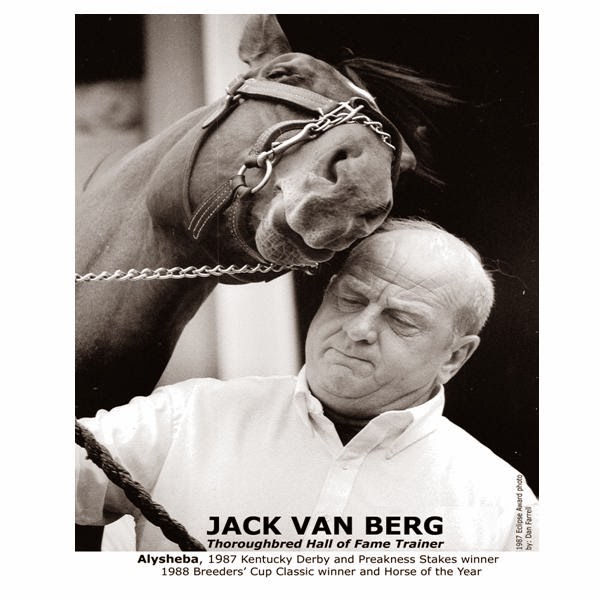 Tampa Bay Downs is proud to welcome Hall of Fame trainer Jack Van Berg, who on Sunday on the first floor of the grandstand will sign copies of JACK: From Grit to Glory, A Lifetime of Mentoring, Dedication and Perseverance – The True Story of Jack Van Berg, an American Horse Racing Legend, by Chris Kotulak. As opinionated and feisty as ever, the 77-year-old Van Berg bristles at the mention of the mega-stables run by such leading trainers as Todd Pletcher and Steve Asmussen, who seem to have horses at just about every major racetrack in the country. “I did that before any of those guys came around – even before (D. Wayne) Lukas,” Van Berg points out. “Back in the 1970s, I had horses at six different tracks. I had assistants everywhere, but they had a rule trainers had to be at the track to saddle a horse every third day or they wouldn’t let you run. So I was flying between Detroit, Chicago, New York, Maryland, Monmouth and Philadelphia. Sometimes, I would get to a track at midnight and check my horses.” Along the way, Van Berg won more races and influenced more racetrackers than just about anyone in Thoroughbred history. Still active with a small string at Oaklawn Park, he is best known for training Alysheba, who won the 1987 Kentucky Derby and Preakness and the 1988 Breeders’ Cup Classic at Churchill Downs and was subsequently named Horse of the Year. Van Berg was the first trainer to win 5,000 races when he sent out Art’s Chandelle to victory at Arlington in 1987, and his 6,417 career victories trail only Dale Baird, Asmussen, Jerry Hollendorfer and King Leatherbury. More impressive, perhaps, is the lengthy list of trainers who apprenticed under Van Berg, including Hall of Famer William Mott, Frank Brothers, Wayne Catalano and Kellyn Gorder. Van Berg won the Eclipse Award for Outstanding Trainer in 1984 and led the nation in earnings in 1976, the same year he set a record for most wins in a year by a single trainer with 496. He won his first classic race with Gate Dancer, who set a track record in the 1984 Preakness and went on to finish third and second in consecutive Breeders’ Cup Classics. His Strodes Creek was second in the 1994 Kentucky Derby and third in the Belmont. Van Berg, who will serve as the auctioneer during Monday’s “Hearts Reaching Out” dinner to benefit the Racetrack Chaplaincy of America, Tampa Bay Downs Division, took time to share some thoughts about his remarkable life and career for the track’s “Racing In The Sunshine” profile series before traveling to Oldsmar.

THE NEBRASKA NATIVE STILL FEELS THE INFLUENCE OF HIS FATHER Marion Van Berg, himself a member of the National Museum of Racing and Hall of Fame who died in 1971. The elder Van Berg established the Van Berg Sales Pavilion in Columbus, Neb., in the heart of the Depression, and from those humble origins sprang a dynastic Thoroughbred family legacy. “Every morning when I wake up, I thank the good Lord for my dad teaching me his work ethic and how to train horses,” Van Berg says. “When I was 16, he put me in a semi-trailer to drive a load of horses from Detroit to Omaha. Talk about an education. If he caught me coming home late, he would make me get up that much earlier the next morning. And he was a perfectionist. If he told you to rub a leg 15 minutes, he meant 15, not 13. I was blessed to come up under him.”

RETIREMENT? THE WORD IS NOT IN VAN BERG’S VOCABULARY. “I’ve worked all my life. My dad worked the heck out of me, from the time I was a little kid. It’s in my system,” he says. “I can’t do what I used to do, but I still ride my horse every day.” Besides, Van Berg has a recurring dream: “I’m going to win another Derby. In this game, you always have that hope, and that keeps you going.” For the immediate future, Van Berg is high on the potential of an unraced 3-year-old son of Roman Ruler in his barn, Roman Pleasure. He might not make it to Louisville, but Van Berg thinks he might see some pretty good horses down the road. “He has more miles under him than most of these other horses have raced, and he’s done everything right so far,” Van Berg says. “We’re about 10 days away from running him.”

VAN BERG EVADES THE QUESTION OF WHETHER DIVINE INTERVENTION played a role in Alysheba’s incredible Kentucky Derby victory, in which he and jockey Chris McCarron sidestepped disaster after clipping heels with Bet Twice in the stretch. “I think (trainer) Willard Proctor probably had the best statement about what happened,” Van Berg says. “He said, ‘Most horses going a mile-and-a-quarter are looking for somewhere to lie down at the eighth pole. This one wants to get up and keep going.’ ” When Alysheba returned to win the Breeders’ Cup Classic the following year in the gloaming on an off-track he wasn’t supposed to like, he retired as racing’s richest horse, with earnings of more than $6.6 million. “If he had kept racing as a 5-year-old, I don’t think anyone would have beaten him. He could do things you couldn’t believe,” Van Berg says.

CHAPTER 37 OF JACK BEGINS, “JACK VAN BERG FREELY ADMITS that he fell far short of being an ideal family man.” He was married twice, for 20 and 13 years, and has five children. “I put the horses in front of everything. You get carried away, and you regret not spending as much time with them as you should have.” But on balance, Van Berg – himself the youngest of nine children of Marion and Viola – knows he provided the best he could for his children and is grateful each found their way in the world.

MARION VAN BERG MADE HIS REPUTATION TURNING CLAIMING HORSES INTO STAKES HORSES, and Jack always took pleasure in devising ways to help his less talented horses reach their potential. “The greatest pleasure for me was taking a horse and improving it,” he says. “Whether he had a problem or there was something that I needed to correct, I always believed any horse I came in contact with should get a chance to race to the best of its ability.” Such a horse was Dave’s Friend, an accomplished stakes winner who had foot issues when Van Berg acquired him in 1982. Among his notable accomplishments, Dave’s Friend won back-to-back runnings of the Count Fleet Sprint Handicap at Oaklawn at ages 8 and 9.

WHAT’S AILING THE SPORT OF KINGS? FOR STARTERS, “People making rules who don’t even know what end of the horse to put oats in.” Then, there’s the new breed of trainer who doesn’t understand what their horse is trying to tell them. Van Berg is fond of bragging on all his assistants who have gone on to tremendous success, mostly because he passed along those lessons from the best – his own father. “I’m damn proud of them – none have had bad tests,” he says. “I taught them how to work and how to follow up on things. I was cocky when I was young, but the older I got, the smarter I thought my father was. Today you have young trainers who don’t even see their horses race – they’re up in the box talking and laughing.”

NOT TO SOUND CURMUDGEONLY, BUT VAN BERG THINKS there is more the racetracks can do to regain their dwindling fan base. “Racing was the only game in town for so many years, we forgot to take care of the fans,” he says. “Sports like NASCAR and Professional Bull Riders know how to take care of people and attract families, and that’s what racing needs to do.” Van Berg advocates tracks stepping outside their corporate mentality and doing more to get youngsters interested in Thoroughbred racing with events such as family days and special areas for children to watch and learn.

IF THERE IS ONE RACE VAN BERG WOULD LIKE TO HAVE BACK, it is the 1987 Breeders’ Cup Classic at Hollywood Park, when Ferdinand and Bill Shoemaker beat Alysheba and McCarron by a nose in a race that decided the Horse of the Year (Alysheba was voted Champion 3-Year-Old Colt). If there is one race he thinks was taken away, it was the inaugural Breeders’ Cup Classic, also at Hollywood. Outfitted in a hood to minimize crowd noise, Gate Dancer, with Laffit Pincay, Jr., riding, dueled with winner Wild Again on the inside and Slew o’ Gold in between, in a finish that seemed more like a Wild West show that a horse race. After a lengthy stewards’ inquiry, Gate Dancer was disqualified from second and placed third. “They should have put Gate Dancer up to first,” Van Berg growls. “(Angel) Cordero (on Slew o’ Gold) was trying to put (Pat) Day (on Wild Again) over the fence, and they started bouncing off each other and knocked Gate Dancer’s ass out from under him.” Time to visit YouTube and take another look!

WHEN VAN BERG HANDLES THE AUCTIONEERING DUTIES at Monday’s “Hearts Reaching Out” benefit dinner, it will mark the continuation of a tradition started after he left college and returned home to Nebraska, where he went to work auctioning cattle at the Van Berg Sales Pavilion. About 15 years later, after Marion Van Berg suffered a stroke, Jack was back in Columbus planning to take his wife to dinner when she told him his father wanted to see him. Marion, who by then could no longer speak, pointed to the sales barn, and Jack postponed dinner and auctioned cattle for two hours with his proud father listening. Marion Van Berg passed away two days later.
Posted by Tampa Bay Downs at 8:25 AM