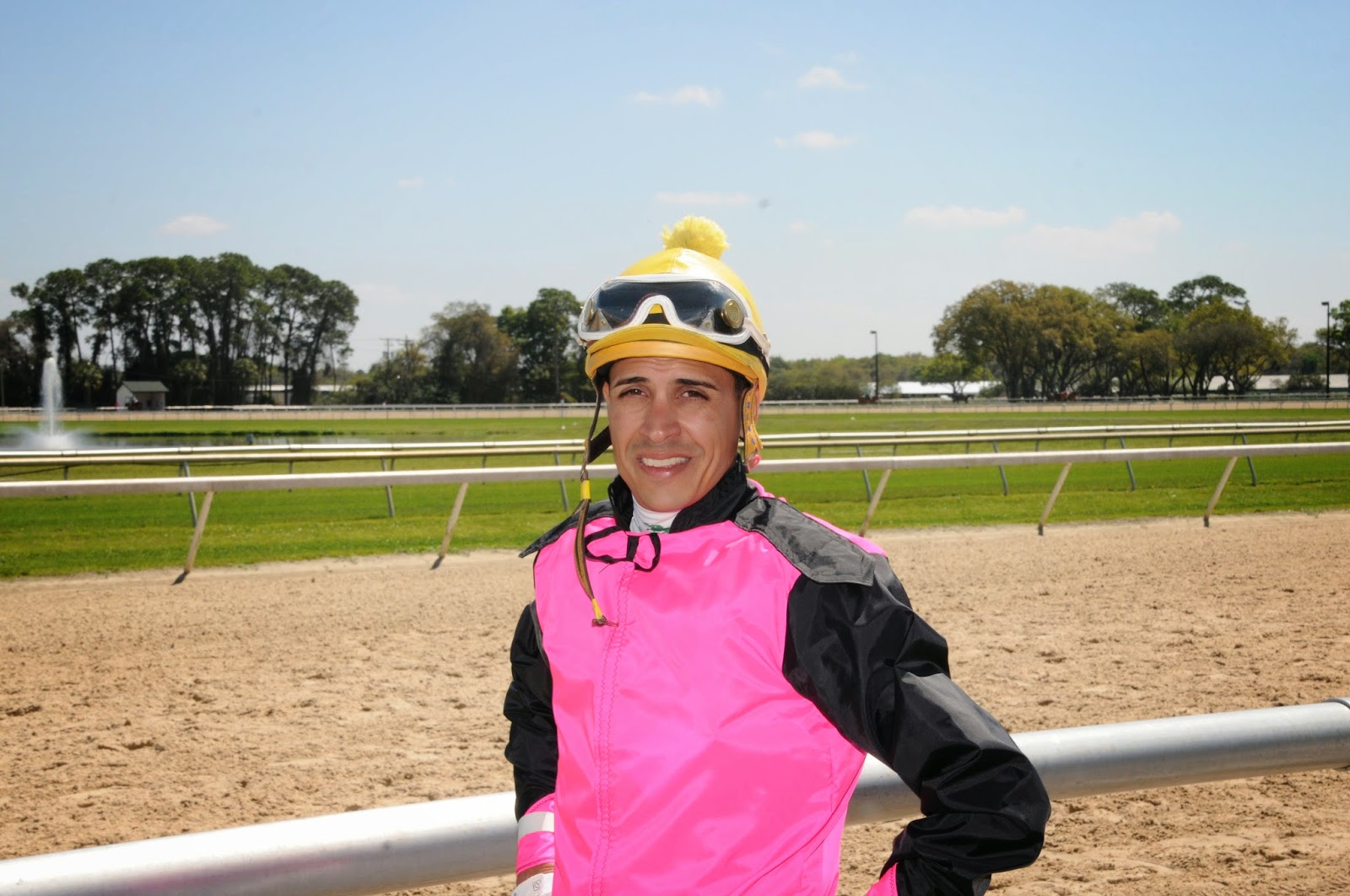 For the Feliciano family, an otherwise run-of-the-mill allowance race at Thistledown outside Cleveland in August of 1997 proved to be a symbolic passing of the torch. Young Ricardo – who had ridden his first winner only a few weeks earlier and would celebrate his 21st birthday the following day – was on a confirmed closer named Call Me Marfa. His father Benny Feliciano, a past Tampa Bay Downs riding champion with more than 2,600 career victories at the time, rode Go Kaz. Adding to the family drama was the fact Go Kaz, an Ohio-bred gelding, was trained by Miguel Feliciano, Benny’s older brother and Ricardo’s uncle. Ricardo kept Call Me Marfa at the rear of the field early, asked for his best approaching the stretch and found a seam between horses, beating his father to the wire in the final jump. Although Benny rode his share of winners for the next couple of years before joining Miguel in the training ranks, it was time for Ricardo to carry on the family heritage. With more than 1,700 victories, mount earnings of $23.4 million and a reputation as one of the best gate riders in the business, Ricardo has rewarded his father and uncle – both trainers at Tampa Bay Downs – for their faith in his ability to achieve his lifelong dream. Ricardo, who has competed here the past 15 years and is based at Presque Isle Downs in Erie, Pa., in the summer, lives in the Cleveland area with his wife Lady and their sons Benny, 3, and Armani, soon to be 1. Ricardo’s mother Millie and sister Carmen work in a doctor’s office in Cleveland. Currently just outside the top 10 jockeys locally with 18 victories after a slow start, Ricardo, now 37, shares his passion for his calling and the horses in this installment of Tampa Bay Downs’ “Racing In The Sunshine” series of profiles.

I WAS PROBABLY 5 OR 6 WHEN I FIRST GOT THE FEVER of wanting to put on the pants and boots, get on a horse and do the same thing as my dad. Having already gone through it himself, he would have preferred seeing me go to college and do something more stable than being a jockey. But he knew how badly I wanted it, so he backed me 100 percent. I rode my first race at Classic Mile Park in Ocala when I was 11; it was just down the stretch for young kids, part of a country day at the races. I rode against three other horses and finished third, and it was very cool. I know my dad had a ball, too, because that was his little boy out there on a horse.

BY THAT TIME, I ALREADY KNEW I HAD NO DESIRE TO GO TO COLLEGE, so my father started taking me to my uncle’s barn during the summer. I was working with my uncle’s horses, but my dad would be showing me what to do – how to put on bandages, how to tack up a horse, cleaning the stalls. He taught me everything from the ground up, and I could barely wait until I graduated high school (Bedford High in Ohio) to go to the racetrack.

THE EDUCATION OF RICARDO FELICIANO – I guess you would call it my apprenticeship, before I became an apprentice jockey – wasn’t over. I got up in the mornings to gallop horses for my uncle and other trainers, then I worked as a valet at Thistledown for three years while I was learning to be a jockey. A valet is the guy who makes sure a rider’s tack and boots are clean, hangs up their silks for each race, organizes their equipment and provides their supplies and accessories. My dad was good friends with all those riders, and a few of them took me under their wing: guys like Julio Felix, Heriberto Rivera, Jr., and the late Michael Rowland.

THAT WAS EVERY YOUNG KID’S DREAM: TO BE IN THE ROOM with guys who are doing what you want to do. You get to watch all the races, and you hear every story from every jock after a race, all raw and uncensored, right there. I learned there are no shortcuts to success, even for the best jockeys. I saw a lot of stuff and learned a lot those three years, and by the time I started riding, I was ready.

IT’S JUST THAT ADRENALINE RUSH, MAN – the fact you cross the wire first against a group of them, and you feel like you’re part of that. You carry that horse home; it’s a feeling you can’t explain unless you do it. Money is another thing I like about my job, of course, but you’ve got to win to make the money. I have a great passion for horses. I grew up with them all my life. I put a lot of trust into them. They have so much power, you know if they get it in their minds to do something, they’re going to do it, with or without you. I don’t think about that part too much. If you do, you might as well not even ride.

MY AGENT, PAULA BACON, ALSO HAS RONNIE ALLEN, JR.’S BOOK. Some people might say that’s like being the guy who hit behind Hank Aaron for the Braves, but I don’t look at it that way. Ronnie has so much business, he can’t ride every horse, and a lot of times I’ll end up riding one of his calls that may be the better horse in the race because he has to keep someone else happy. That works both ways too, but at this meeting especially, Ronnie has been an inspiration. When you see a guy his age cruising around the track whupping butt, you feel you can do it too. It’s cool to ride with guys with that kind of knowledge and experience and desire.

HORSE RACING CAN TAKE YOU TO A LOT OF DIFFERENT PLACES, and this year I’ve won races in St. Croix in the U.S. Virgin Islands and Tortola in the British Virgin Islands. One of the horses I won on, Town Hall, had been claimed last fall at Belmont. They like to use out-of-town riders, and I was paid to come in and ride. Jose Ferrer, Jose Lopez and Julio Felix were there, too, and Victor Lebron, who grew up in St. Croix, rides there. I think it’s easier because the fields are smaller, but when that gate opens a switch goes off, the adrenaline starts flowing and it is all business. They only race one day a month, and it is a huge festival. The people there have so much love for the sport.

MY DAD ALWAYS PUT IT IN MY HEAD THAT IF I WANTED TO BE A JOCKEY, I had to learn to save money for the slow times or when I was injured and couldn’t ride. I make most of my income up north, and it is so competitive here, with so many riders, that I have to tighten my belt and cut down my spending. I make enough here to pay the bills, keep my head above water and, hopefully, be able to come back next year after a good summer.

A LOT OF PEOPLE TELL ME I’M A STRONG GATE RIDER. I think I’m a good finisher, too; you can’t be one-dimensional and expect to win much. Races can be won or lost at the break, but it’s not something I spend a lot of time analyzing. When I rode in Chicago, E.T. Baird, who was one of the best speed riders in the country, helped me a lot coming out of the gate, because that wasn’t one of my strong points then. When I went to Mountaineer, that really peppered me up as far as enhancing my gate skills because it seems like everybody there sends their horse and you have to get good position early.

OBVIOUSLY, YOU WANT YOUR HORSE STANDING STRAIGHT and not moving around in the gate too much. I give my horses a lot of rein – don’t fuss with them or try to grab them or anything – and let them do it on their own. I try to let them get their feet under them and take it from there. A lot of jocks try to shove on them early, but I just let them do their thing and it usually seems to work out.

IT’S KIND OF FUNNY – MY DAD, WHO IS SMALL FOR A JOCKEY, always looks at me like I’m his little boy. Every now and then he nags at me like I’m still 10, to the point where I just shake my head and say ‘Yeah, dad, whatever.’ But the truth is, he’s my biggest hero. I’ve been blessed. The older I get, the more I realize how right he was when he told me all those little things. You don’t understand it until you get older and have kids yourself, and then it clicks and you realize why he stayed up all night wondering when you were coming home. I’m lucky I have a dad who showed me the ropes and kept me from taking the wrong path.

I’VE RIDDEN SOME REAL NICE HORSES FOR MY UNCLE MIGUEL – Pay the Man, a 10-year-old mare who has won 21 stakes and more than $1-million; Bernie Blue, who was still winning stakes as an 8-year-old; and Majestic Dinner, another multiple-stakes winner bred and owned by Dr. D.W. Frazier (Pyrite Stables), my uncle’s main client. Miguel has always been a soft-spoken person; I was fortunate to fall into that spot at the start of my career where he always had a string of more than 20 horses. He is a very good person to ride for, he never complains about anything and he has nice horses. That’s a heck of a trifecta and I feel pretty blessed about it.

I COULD SEE ONE OF MY SONS FOLLOWING IN MY FOOTSTEPS. It’s only natural for a little kid to want to do what daddy does. I feel the same way about it as my father did –I hope they’re going to take the brain route and go to school and try to find a more stable career than being a jockey. But if riding horses is what they want to do, I’ll back them up 100 percent, like my dad did with me.

ON OFF DAYS, I ENJOY FISHING IN THE CHANNELS AND JUST HANGING OUT with my kids and family. We have a house in Cleveland, but eventually I’d like to get a little farm where we can have some animals, like the farm my dad used to have in Ohio. I’m pretty laid-back – I’m not one of these adventurous guys who like to do all sorts of crazy stuff. To me, a good day when I’m not riding is throwing some food on the barbecue grill and kicking back.
Posted by Tampa Bay Downs at 6:25 AM