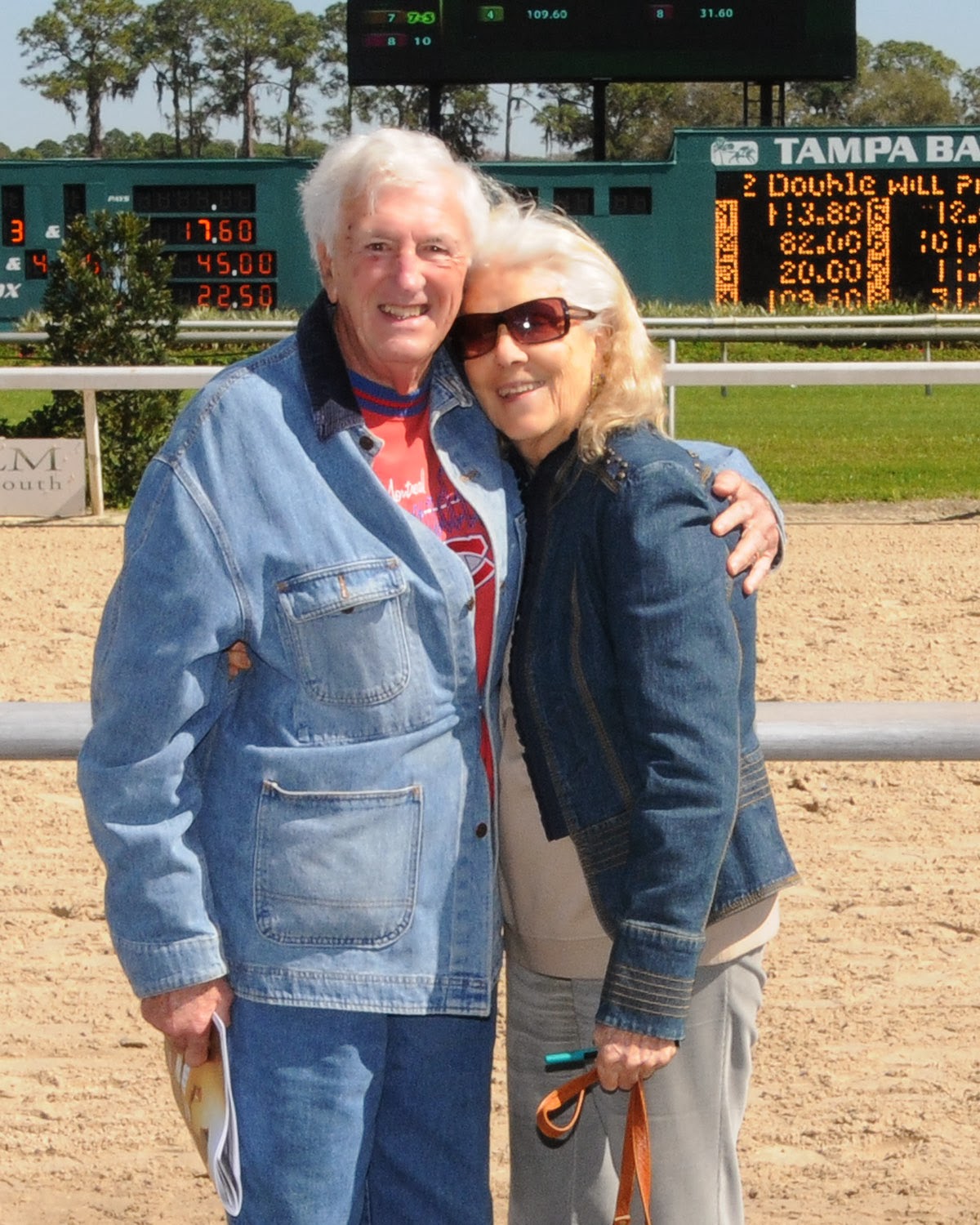 Theirs is a love story that began more than 75 years ago, when Thoroughbred racing and their hometown Montreal Canadiens reigned supreme on the North American sports scene. The East Lake Woodlands residents fell in love in first grade, and have been virtually inseparable since. Francois’ father was a jockey and trainer; his grandfather, Joe Cattarinich – the first goaltender in Canadiens’ history, a co-owner and coach of the squad and a member of the Hockey Hall of Fame – owned several racetracks. Yolande rode show horses as a youngster, so it was inevitable they would become involved in horse racing. Their passion for the sport, the horses and each other has grown ever since. From their first win in 1950 at Blue Bonnets in Montreal (with the first horse they owned, Wateree) until their semi-retirement in 2007, their Circle Y Stable accounted for more than 1,300 victories. For several years in the 1960s, Circle Y was among the top-25 stables in North America in victories. While Francois handled the training duties and ran the stable, Yolande made most of the breeding decisions after forging a friendship with legendary Claiborne Farm master A.B. “Bull” Hancock. Their favorite horse was Lady Yolande, purchased in 1956 as a yearling for $11,000. She won her debut by 16 lengths and captured the inaugural Vandal Stakes at Fort Erie as a 2-year-old, won the Cleveland Handicap and Sophomores Handicap the following year and developed into a solid producer as a broodmare. Another top broodmare for the Serembas was T.V. Royal, acquired because Yolande liked the fact she was by T.V. Lark, the 1961 Eclipse Award champion turf horse. Among T.V. Royal’s top runners were the couple’s filly Marquise Cut, who won six stakes and was 1987 New England 3-Year-Old Filly of the Year, and stakes-winning fillies Great Review and Alleluia. Other top horses included homebred stakes winners Country Sky and Cremiest, both from their mare Chou a La Crème; stakes winner El Espectador; Latimer, who finished second in the 1977 Grade III Ak-Sar-Ben Cornhusker Handicap; and Sir Tom, who won 17 races. In the early 1980s in New England, the Serembas hired Tampa Bay Downs Vice President of Marketing & Publicity Margo Flynn as a groom and hot walker. In 1997, Francois became a director of the short-lived United Thoroughbred Trainers of America, Inc. Newspaper clippings of a lifetime spent in racing have faded, but memories of their many thrills and occasional disappointments with horses remain vivid. The Serembas, who have been married 60 years, recently shared some reflections for Tampa Bay Downs’ “Racing In The Sunshine” profile series. (In the interest of full disclosure, Yolande allowed Francois to do most of the talking. How do you think they’ve stayed together so long?).

WE ARE VERY LUCKY PEOPLE. We’ve had good health, we made a good living and I married God’s greatest creation. If Yolande had married the devil, he would have been a Christian. I’ve always felt that way, since the time we were 6 years old, and I’ve never been afraid to say it. We know we aren’t going to live forever, but up to now it ain’t been bad. We have always been in love with the horses. My father was a jockey and trainer and my mother worked in the racing secretary’s office at Blue Bonnets, and my grandfather owned Blue Bonnets and other tracks, including Fair Grounds, so we came into the sport naturally. In 1950, my mother gave me $700 to claim a filly who did pretty well, so we decided to get married.

I PLAYED SOME HOCKEY AT SIR GEORGE WILLIAMS UNIVERSITY in Montreal, then I went to McGill University thinking I’d be a lawyer. But the pull of the racetrack was too strong. These horses get in your blood, and when you find someone else who loves it as much as you do, every day is like a vacation. I also did a little boxing, sparred with Harold Gomes, who later won the world super featherweight title. He told me the only thing I would be is a punching bag, and I appreciated his honesty. Yolande didn’t like it at all. I came home once beat up pretty bad, and all she said was ‘Enjoy it?’ I would have had to be pretty stupid to keep going.

OUR MOST FAVORITE HONEYMOON PERIOD, I think, was at Scarborough Downs in Maine in the early 1950s. We had been racing in Canada and the purses were terrible – $500, $700 a race – so we took some horses to Scarborough, where they were paying $1,500. I thought, holy mackerel, where did this place come from? We were paying our grooms $75 a week and I could feed the horses for 85 cents a day – it was a whole different world. Well, the track was right on Old Orchard Beach, so we rented a cabin for the summer and spent our time away from the track enjoying our surroundings and each other’s company. We’ll never forget those summers.

YOU MIGHT AS WELL ASK WHAT TRACKS WE DIDN’T RACE AT. I think the total we have raced at is 26: Tampa Bay Downs when it was Sunshine Park, Gulfstream, Hialeah , New York, the Maryland tracks, Fair Grounds, Louisiana Downs, Detroit, Sportsman’s, Hawthorne, Centennial in Colorado, Suffolk, Rockingham. Hialeah in the glory days of the 1960s and ‘70s was probably our favorite. The class, the beauty, the atmosphere – it was racing at its best. When you went to the paddock, it was like going out to dinner; everyone was well-dressed. Plus we did well there, like the day in 1991 when Cremiest won the City of Hialeah Stakes on the turf by five lengths and paid $93.80. That always helps.

THE DIFFERENCE IN RACING FROM THEN TO NOW is like night and day. I trained horses for some wealthy owners such as Bruce Norris, who owned the Detroit Red Wings, and Jean-Louis Levesque, who owned the great Fanfreluche and La Prevoyante. These were people who loved racing and loved their horses. Some of my owners would bring their children to our barn on Sunday, and we would let them ride the stable pony. Now a horse is a business, and I don’t think it’s a good business. And I don’t know how they can make money. It costs a guy at least $15,000 a year just to own a slow horse. And at a lot of tracks now, it seems like they promote the casinos more than the horses.

YOLANDE TREATED ALL OUR HORSES LIKE THEY WERE FAMILY, and I never lost sight of the importance of treating each one like an individual and taking the time to keep them happy. It’s not easy being a racehorse. They start out in a pasture doing whatever they want, then here comes a jerk who puts a bridle in their mouth, and another guy puts a saddle on them, and the horse thinks ‘What the hell are they doing?’ Then some guy gets on them with a whip, so the horse is sometimes in shock before realizing what’s going on. But they adjust. Some can’t do it, but they adjust, and we always treated them the best we could, fed them the best and grazed them outside their stalls in the afternoon.

LADY YOLANDE WAS OUR BEST HORSE, and she was a decent broodmare, too. She won seven races for us, but she gave us quite a scare as a 2-year-old at Fort Erie. Chris Rogers, an excellent jockey, was on her for the Yearling Sales Stakes, and she buck-jumped and tossed him in the air right at the start. He lost his stirrup irons and went flying in the air, but somehow he came right back down on her back. They dropped back to last place, but rallied to finish third. It was one of the most amazing feats of horsemanship we’ve ever seen.

WE’RE PRETTY RELIGIOUS PEOPLE, AND WE’VE ALWAYS BEEN ABLE to take a punch without thinking it’s the end of the world. When we lost a horse, we got over it pretty quick because we knew we had a lot of other things to be thankful for. We have always been optimistic people. But it was heartbreaking when we learned Yolande couldn’t have any children. We thought about adopting, but were never able to because we were on the road all the time. “I’m the oldest of four children, so I thought I would be like my mom and have a baby every two or three years,” Yolande added. “But it didn’t happen, and our horses were like our babies.”

I’VE MADE MISTAKES IN RACING THAT I DON’T KNOW how Yolande stayed with me. We had a horse named Country Sky who won the Ben Franklin Stakes at Garden State and finished second in the Sentinel Stakes at Philadelphia and was a real good breadwinner. So I got smart and decided we would give him some time off, then run him for a claiming tag at Rockingham to get him eligible for starter races at Saratoga. Yolande said I should get my head examined, but I couldn’t see anyone claiming a gelding for that kind of money. We lost him, but the guy who claimed him made a mistake, too, and lost him to a claim, and Country Sky won three races at Saratoga for the new owner.

DO I HAVE A BUCKET LIST? I WOULD LIKE TO KNOW what we haven’t done. Racing has taken us all over the continent, and we’ve been to Ascot in England and Chantilly in France. I’ve even been in jail – but not for what I did. When I was into boxing, Harold Gomes asked me to join him on a trip to Walpole in Massachusetts. I guess the prisoners were getting tired of fighting each other, so they arranged for us to box them. I was scared to death in that place, but the guy I drew to fight was terrible. Harold went up against five guys, and when he was talking to the prisoners one of them sucker-punched him. Harold murdered the guy – not literally, of course.

WE’RE VERY THANKFUL FOR HOW PEOPLE IN RACING have treated us. It’s been a dream come true – me, her and horse racing. We’re still treated unbelievably well by everyone we come across. Here at Tampa Bay Downs, people do everything they can to make us feel important. Of course, we aren’t entirely out of racing; a 4-year-old filly Yolande bred, Advantage Please, is running in the eighth race Thursday (Feb. 20). She is trained by William Downing, who we hired as a stable hand when he was 13 – but told us he was 16! We can’t begin to count all the blessings our lives with horses have provided.
Posted by Tampa Bay Downs at 6:56 AM