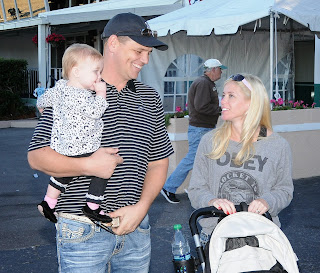 Thanks to the wonder of simulcasting, Jamie Ness has become one of the best-known Thoroughbred trainers in North America. But there is no magic formula responsible for his success. The Odessa, Fla., resident is at Barn 14 on the Tampa Bay Downs backstretch every morning at 5 a.m. to check his string of 40 horses, organize his staff, oversee workouts and make final preparations for that day’s races. He also stays abreast via telephone of the 30 horses he trains at Laurel Park in Maryland. Since starting his career at Canterbury Park in Minnesota, the South Dakota State graduate has streaked across the racing firmament like a shooting star, saddling more than 2,000 winners and leading the continent in 2012 with 395 victories. He has won the training title at Tampa Bay Downs seven consecutive years. Rich Papiese, whose Midwest Thoroughbreds operation is Ness’ sole client, said “He sees things other people don’t see. From the time we drop a claim (for a horse), he knows where we are going with that horse right away. You would be hard-pressed to find someone who works as hard as he does.” The 39-year-old Ness is married to a former jockey and trainer, Mandy (McKeever). They have a 1-year-old daughter, Hannah.


I DON’T FIND MYSELF STAYING AT THE BARN WASTING TIME like I did before Hannah was born. I do everything we need to do, but I don’t spend time messing around. I’m at home more now, that’s for sure. Being a dad is the best feeling in the world. It helps a lot because Hannah likes to come out here and play with the horses, so it’s fun to have her involved in my job. I have to admit, Mom does all the hard work and I get all the glory. It just shows me there are more things in life than my job. I try not to bring work home, anyway, but now I can lose 10 races in a row, come home and see Hannah smiling, and it makes a big difference.


IT’S REALLY FUN GOING TO WORK WITH YOUR WIFE EVERY DAY. I mean it. Mandy grew up in the business and knows all the ins and outs, the long hours and the travel, and she accepts all that. Sometimes all we do is talk about the horses, but that’s because we’re around them so much and we love it. She watches over everything here when I’m in Maryland, so I know the operation is running smoothly. She used to pony a lot in the mornings, but we’re expecting again in June so she doesn’t do that now. This is our business, and we’re partners. My job and my success are part of her life, too.


YOU BET I HAVE CONCERNS ABOUT THE FUTURE of racing. I came into the sport when racing was on a downslide. I’m worried about attendance dropping at a lot of tracks. Tampa Bay Downs does a good job drawing fans, but I don’t see a lot of young people here. I think night racing would be a big draw, but I know Florida doesn’t allow it. I’m concerned that slot machines that boost purses are just a quick fix, and that it is going to backfire on us in a few years. I don’t profess to have a whole lot of solutions, and I know there are a lot of people with marketing degrees who are a lot smarter than I am working to reverse the trend. The advantage horse racing had for years was that it was the only gambling game in town. So we never really took care of our customers and when other forms of gambling came along, a lot of people migrated there. I am hoping it is cyclical and the glory days of racing come back around, but we have to switch around how we do things. We need to treat it more like entertainment.


MY FIRST FEW YEARS AS A TRAINER, I WAS RUNNING THE SIMULCAST FACILITY AT CANTERBURY in Minnesota, and training horses was basically a hobby. I wouldn’t say I struggled, but I didn’t win a lot of races; according to Equibase statistics, I was 35-for-332 my first three years. But as I started gaining experience and getting more business, I decided it was time to fish or cut bait and become a full-time trainer. I had helped my dad, John Ness, a little growing up when he raced some horses at smaller Midwestern tracks, but when I started at Canterbury I was kind of on my own. I didn’t follow anyone’s lead. I just kept working hard and claimed a couple of good horses, and it blossomed from there. One thing about training horses: You won’t get anywhere if you aren’t willing to put in the time.


I DON’T THINK TRAINING RACEHORSES IS ROCKET SCIENCE. First of all, you aren’t going to do anything without decent horses, just like a football coach needs good players to win. Then you take good care of them, assess their ability, train them right and put them in races where they belong. There is no use running a horse where it can’t win. I like all my horses, but when one gets claimed I know we did everything we could with the horse and good luck to the next owner. If you’re a sentimentalist, you’re probably not in the business anymore. You have to treat it like a business, but you better take care of your horses the best way you know how because they are your livelihood and you can’t help getting attached to them.


I FEEL LIKE WE GET ALONG WITH EVERYBODY on the backstretch. I don’t know that I would describe the relationships with other horsemen as close, but it’s still a family. If something happens to somebody, everybody helps out. But we’re also competitors, and we’re all trying to do the same thing – win races and make a living. So after a race you congratulate the winner, but beforehand we’re trying to beat you.


IT IS SO IMPORTANT TO HAVE A GOOD RAPPORT WITH YOUR OWNER. Rich Papiese and I have been together since 2008, and he has been very instrumental in my success. After my daughter was born, he understood I didn’t need to win 400 races and be leading trainer at six or seven tracks every year, so he agreed to let me cut back to two strings. He’s a good guy who really likes his horses, and he wants me to do everything the right way. I think I will always have a relationship with Midwest. Whether I train only for them or have some other horses is to be decided in the future, but I like the way things are working.


I HAVEN’T HAD THAT GRADED-STAKES TYPE OF HORSE YET, but I’m hoping to find one somewhere. Rich has been buying more young horses at the sales, and we have a bunch of yearlings at his training facility in Anthony, Fla., so we hope to have more 2 and 3-year-olds competing in the future. With the horses I work with, it is pretty hard to get a graded winner, because I run a claiming operation and we don’t get many young horses. I sure don’t want to be the guy who buys a horse for $300,000 and winds up running him for a $16,000 claiming tag. Guam Typhoon (a 7-year-old multiple-stakes winner) got close for us last year. His numbers were borderline for the Breeders’ Cup Sprint, but he was just a notch below and I knew better than to just take a shot. Was it tempting? Absolutely. But he had had a long campaign and was a little tired, and I know I did the best thing for the horse by staying away. Everybody wants to run in the Kentucky Derby or the Breeders’ Cup and so do I, but you have to have the right horse to do it.


IT’S FUNNY HOW SOME HORSES’ NAMES ARE SO MEANINGFUL. Lookinforthesecret was a horse I claimed here for $12,500 in 2007, and he ended up winning stakes after stakes; eight all told, including four at Tampa Bay Downs and a $250,000 stakes at Calder. Nobody knew my name until that horse started doing well, but when he kept winning, a couple of people got interested and claimed some horses for me to train, and things started to take off. I’ll always be grateful to Lookinforthesecret because he helped me make a name for myself, and he is still active as a sire. His win pictures are up on my walls; I don’t have any other ones there.


IF I HAD TO STOP TRAINING TODAY, I’d probably move back to the Dakotas and do something with horses or livestock. I don’t want to do anything else, nor do I really have the skills for anything else. You see a lot of old trainers who train forever, and when they retire, they die. They’re used to the routine and the adrenaline rush and the competitiveness, and when that’s gone, they don’t always get along. If I didn’t work as a trainer, I’d probably be out here every day watching races and betting. I love the whole sport, and I’m living the dream. I hope I’m training until I’m 90 years old, because that means there is still racing somewhere.
Posted by Tampa Bay Downs at 7:26 AM