A Tampa Bay Downs insider’s opinions, observations and reflections about their
favorite sport 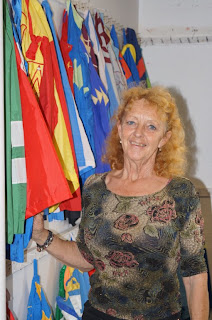 Among Thoroughbred racing’s hierarchy, women were still viewed as second-class citizens on the backside when horse-loving teenager Linda Keelan arrived at outside in 1969. Female trainers were few and far between, and it had been only a few months since Diane Crump made history at as the first woman jockey in . “You might have seen a few women then galloping horses or walking hots, but mostly they were working in the shedrow,” recalls Linda, the daughter of a coal miner and blacksmith, Avery Mullins. Linda went to work for trainer Clyde Crandwell, who figured she would be a no-show when he told her to report for duty at 3:45 a.m. But Crandwell’s job offer represented her window to a lifetime in Thoroughbred racing, and she has been keeping track hours ever since. “I had quit school when I was 15 and had two daughters before I was 18, and I can’t recommend that to anyone,” Linda says. “But for me, horse racing has always been a passion. Not one day in my life did I ever get up and think I had to go to work.” Linda started ponying horses to the track at and Detroit Race Course in 1972; five years later, she passed her trainer’s test at Finger Lakes in on “one of the happiest days of my life.” That same summer, she won her first race with a Michigan-bred mare named Mylette. Training anywhere from 5-to-17 horses at a time, Linda won races at Tampa Bay Downs, Gulfstream, Finger Lakes, , Thistledown, , and Rockingham. “I never had a lot of owners,” she says. “Sometimes people would owe me money, so they would give me a racehorse and I’d patch it up and win with it.” In 1982, Linda married jockey Danny Scocca; they were together 16 years. When Linda became a jockey’s agent, Scocca was her first client. Over the course of 11 years, she also “hustled book” for Ronnie Allen, Jr., Ricardo Lopez, Bennie Feliciano, Heriberto Rivera, Jr., and Gary Bain. Linda, who sold her High Hopes Thoroughbred farm in Brooksville last year, has been in charge of the silks in the jockeys’ room at Tampa Bay Downs since 2008. At any one time, she might be juggling more than 350 pairs of colors, between laying out that day’s silks, preparing the next day’s sets and laundering. She also ponies horses in the morning, often working for trainer Kathleen O’Connell, who was galloping horses at the tracks at the same time Linda was getting her start. Linda will head to Colonial Downs in when the 2012-13 Tampa Bay Downs meet ends to work as a pony rider. In addition to her two grown daughters, Linda has a grandson and a great-grandson.

BEST HORSES I’VE EVER SEEN/TRAINED: I got to see Secretariat win the Arlington Invitational in person and I watched Cigar win the 1995 Donn Handicap at Gulfstream. Ruffian and Seattle Slew also fell into that category; it was breathtaking to watch those horses run. Courtmate was probably the best horse I trained. He wasn’t much, but he paid me and my girls just about every time he ran.

HOW I GOT STARTED IN RACING: After we watched Northern Dancer win the 1964 Kentucky Derby on TV, I told my father I would be the first woman to win the race. He told me ‘Well, it’s not a game for women,’ but I knew I was going to train racehorses.

MY BIGGEST INSPIRATION: My dad, Avery Mullins. When I was growing up in Virginia, I took out a horse I wasn’t supposed to be riding, and he went over the side of a mountain. We had to cut the saddle off with a butcher knife so he could breathe normally and drag him back up the side of the mountain with a bulldozer. I was scared, but when my father got home he said ‘Young lady, if you want to ride, you go ride.’ He always told me I could do anything I put my mind to.

ONE CHANGE I WOULD MAKE TO RACING: Establish uniform medication rules across the board, or allow no medication use at all.

MY FAVORITE ATHLETE: Johnny Longden, the late Hall of Fame jockey. I used to have an art store, and he sent me autographed items and also got me started growing orchids.

WHAT ELSE I’D BE DOING IF. … If I had more time, I’d complete the memoir I’ve been working on the past 30 years.

FAVORITE THINGS ABOUT BAY : The sunshine, the location, a kind dirt course and a very good turf course.

ADVICE TO SOMEONE STARTING IN RACING: Have a love for the game and a lot of patience, and don’t count on the horse winning to pay your bills.