A insider’s opinions, observations and reflections about their
favorite sport. 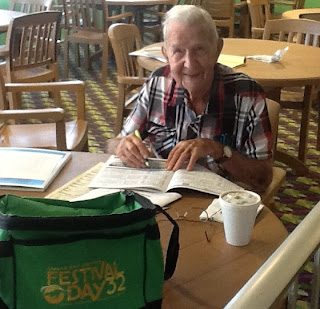 A fixture at Tampa Bay Downs since moving to with his late wife Vivian in 1985, 96-year-old John Soos finds a day at the races a way to stay active and keep his mind sharp. “I’m not a big bettor, but I dance every dance,” Soos says. “That’s dumb, but I rationalize it by telling myself it’s just a couple of bucks, and I can’t hurt anyone but me.” As a U.S. Naval Radar Operator, John Soos spent the latter days of World War II in the south Pacific aboard the USS LSM-420, an amphibious assault and transport ship sent in after the Battle of Okinawa to evacuate a Sea Bee base. During his watch, the ship was part of a convoy that got caught in a typhoon, with 150-foot swells making it feel as if he was being lifted to a mountaintop and dropped to a valley floor. While anchored in , the crew of the LSM-420 watched warplanes dive-bomb the island, an experience Soos compared to watching a movie. When a Japanese suicide plane flew overhead, ships opened fire, shooting the plane from the sky but also resulting in casualties from friendly fire. Days later at , with the end of the war in sight, Soos watched flares from the American fleet light up the night sky. “The greatest fireworks display of my life,” he later wrote. It wasn’t until January of 1946 when Soos arrived home in , to be reunited with Vivian and their 5-year-old son, John Soos III. Soos returned to work with the Nineteen Hundred Corporation, which later became Whirlpool. Soos, an assembly inspector, quickly became active in labor negotiations, but he never considered himself strictly a union or a company man; it was the issue that needed to be grasped and debated, above common politics. In 1949, Soos and four fellow workers pitched in $5 each to form the Nineteen Hundred Employees Federal Credit Union in , giving workers back from the war the ability to secure loans for down payments on homes. Soos served as the President of the Credit Union until he left Whirlpool in 1960. The Sooses briefly owned a golf course and bowling center called Bowling Green Lanes and Country Club in Bridgman before he became a licensed insurance agent in for Wayne National. For a brief time, he was part-owner of the Twin City Sailors, a pro basketball team featuring 1963 NCAA champion Loyola of Chicago stars Jerry Harkness, Les Hunter and Johnny Egan. Around that time, Soos started getting interested in Thoroughbreds; he and Vivian went to in December of 1963, rented an apartment and went to the races at Fair Grounds every day for six weeks. Soos acquired half-ownership of a horse named Royal Opening, which won its first start under his colors before being claimed. When Soos won a convention trip to in 1966, he and Vivian spent three days on ; he got to play golf with future Hall of Fame baseball stars Al Kaline and Harmon Killebrew. Soos also took trips to , , and , and calls the most beautiful place he has been. Soos lives six months in Port Richey and six months in with his companion, Eleanor Wolf. In addition to his son John, he has two grandsons, a great-granddaughter who is studying medicine at the and two great-grandsons.

BEST HORSE: I wasn’t a big horse racing fan in my younger days, but I imagine 1943 Triple Crown winner Count Fleet was one of the best ever. His sire, Reigh Count, won the 1928 Kentucky Derby, and Count Fleet sired the 1951 Kentucky Derby winner, Count Turf. I pay close attention to bloodlines. When I see something by Indian Charlie, I know I’m going to get a race out of that horse.

HOW I GOT STARTED IN RACING: Back in the late 1930s, I was making $10 a week as a bartender. The bread man was a horse player, and I sneaked him 25 cents to make a bet for me. In , there was a bookie on the second floor of a hotel, and you would climb up the fire escape to get there. I stayed in the car listening to the races from on the radio, and I soon realized they were still taking bets after the race was over.

MY BIGGEST INFLUENCE: Elisha “Bud” Gray, who was the Chairman of the Board and President of Whirlpool. He knew everybody by name, from the top dogs down to the janitors. While he was very knowledgeable, his greatest asset was his feel for people.

ONE CHANGE I WOULD MAKE TO RACING: I don’t know if I am qualified to answer that, but I would like to see more owners and trainers run horses where they belong. They get a cheap claimer and want to win a stakes, but you can’t do it.

MY FAVORITE SPORTS TEAM/ATHLETE: The Detroit Tigers and their Hall of Fame right fielder, Al Kaline. He won the American League batting title when he was a kid and has always been a down-to-earth man.

NO. 1 ON MY BUCKET LIST OF THINGS TO DO: I’d like to see my Navy buddies again. There are very few of us left.

FAVORITE TV SHOW/MOVIE: I enjoy Bonanza, because they are trying to do good all the time. My favorite movie is Dave, with Kevin Kline; they should run on every station that leading up to the next election.

WHAT ELSE I’D BE DOING IF. … More yard work. We have a big oak tree in that rains down leaves, and I like to keep things looking nice.

FAVORITE THING ABOUT BAY : There are a lot of really friendly people here, and no one goes around with their nose in the air. And (General Manager) Peter Berube has mellowed a little. He gave me a clubhouse season pass on my last birthday.

ADVICE TO SOMEONE STARTING IN RACING: Make like you’re back in school and don’t try to become an expert overnight. I don’t really come out here to make money; I come to enjoy myself for the day.