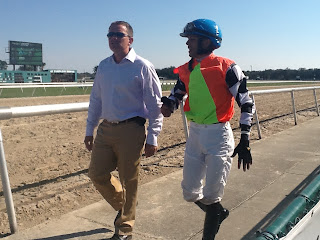 A insider’s opinions, observations and reflections about their
favorite sport


It doesn’t take Luis Garcia long to make a positive impression. Besides being one of the most cheerful, enthusiastic athletes you could hope to meet, the 28-year-old native of has stamped himself as one of the track’s top riders since arriving at Tampa Bay Downs for the 2010-11 season at the urging of trainer Leigh Delacour. Garcia won 34 races that season, highlighted by his sterling ride aboard 43-1 shot Watch Me Go in the Grade II, $350,000 Tampa Bay Derby for owner Gilbert Campbell and trainer Kathleen O’Connell. Since beginning his career 10 years ago, Garcia has ridden almost 1,300 winners, with total purse earnings above $27-million. Garcia and his younger brother, Geovany, are well-known on the mid-Atlantic circuit; their uncle Julio is also a successful jockey. In 2007, Luis rode Forty Crowns to victory in the Maryland Million Turf at . Garcia is married to a jockey, Elizabel Navarro, and has a 2-year-old son, Justin, and a 5-year-old stepdaughter, Brithany. Riding for such outfits as the Delacour stable, H. Graham Motion and Jonathan Sheppard, Garcia’s optimistic outlook is well-founded.

BEST HORSE I EVER RODE: I got to ride Drosselmeyer here in the 2011 Challenger Stakes, the year after he won the for William Mott. It was his first race in nine months, he wanted more distance and we finished fourth. But I could tell what kind of horse he was (Drosselmeyer won the 2011 Breeders’ Cup Classic). I’ve also been on a bunch of good fillies for Leigh Delacour, like (eventual Grade I winner) Her Smile, who I won a stakes with as a 2-year-old; (stakes winner) Supreme and (stakes-placed) Ageless.

HOW I GOT STARTED IN RACING: I used to watch the races all the time with my grandparents, but I didn’t realize I wanted to do this until I was 15. Watching my uncle ride a lot got me motivated, and I went to the El Comandante jockeys’ school when I turned 16.

ONE CHANGE I WOULD MAKE TO RACING: Better insurance for all the riders. The Jockeys’ Guild and workmen’s comp programs are good, but they won’t cover everything if you are seriously injured.

MY FAVORITE SPORTS TEAM/ATHLETE: I always liked the way (former NBA point guard) Jason Williams played. My favorite teams are the Lakers and the Ravens.

NO. 1 ON MY BUCKET LIST: I want to take my family to , , all the European countries. And I want to take them to when they are old enough to enjoy it.

FAVORITE THINGS ABOUT BAY : The weather is great, the people are friendly and the grandstand is always full. You don’t get that up north in the winter.

WHAT ELSE I’D BE DOING IF. ... I might be an aviation mechanic or in the military police. I graduated from that program back home.

FAVORITE TV SHOW/MOVIE: Two and a Half Men and Mama. I like scary movies.

ADVICE TO SOMEONE STARTING IN RACING: Take your time and try to learn something different every day. And if you fall down, don’t let anyone keep you down – get up and keep trying.