A Tampa Bay Downs insider’s opinions, observations and reflections
about their favorite sport 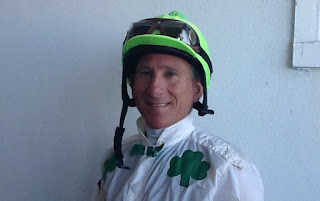 Charles “C.C.” Lopez was born to be a jockey. His father Carlos Lopez, Sr., who lives in Hollywood, Fla., rode for more than 40 years in the United States and Puerto Rico. Three brothers were jockeys; the best-known, Carlos, Jr., remains active in Maryland. And C.C.’s sons David and Erick are former jockeys who currently gallop horses. A mid-Atlantic fixture, Lopez rode his first winner in 1979, capturing the Meadowlands riding title the same year as a teenager. He has ridden more than 4,000 winners and his mounts have earned more than $86-million. Among his best-known horses are multiple-graded stakes winner Gottcha Gold, who was second under Lopez in the 2007 Breeders’ Cup Dirt Mile; Valid Video; Gators N Bears; and Key Lory.


BEST HORSE EVER RIDDEN: Gottcha Gold. Besides finishing second to Corinthian in the Breeders’ Cup Dirt Mile, we won three Grade III races: the Salvator Mile and Philip H. Iselin Breeders’ Cup at Monmouth and the Skip Away at Gulfstream.


HOW I GOT STARTED IN RACING: My dad was a jockey, so I always thought I would ride. The only other thing I wanted to do was be an astronaut.


MY BIGGEST INSPIRATION: My father has always been my idol. He accomplished great things in his career, and I always admired what he could do on a race horse. After he won the biggest race in Puerto Rico, he became a star overnight.


ONE CHANGE I WOULD MAKE TO RACING: Do more to promote it at both the national and local level.


MY FAVORITE SPORTS TEAM/ATHLETE: Thoroughbred racing and my father.


NO. 1 ON MY BUCKET LIST: Race in a NASCAR event. I’ve done a lot of quarter-mile racing at Englishtown Raceway Park in New Jersey, and I have a Pontiac Trans Am 12-second drag racer. I also own a 1985 Cadillac Eldorado and I’ve restored a 1962 Fleetwood.


FAVORITE THING ABOUT TAMPA BAY DOWNS: The turf course. There is nothing wrong with the dirt course, but the turf is a real nice surface to ride on.


ADVICE TO SOMEONE STARTING IN RACING: Be the best you can be.