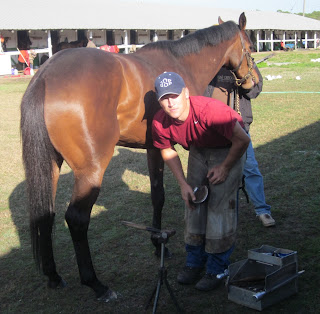 To most people in their 20s, the world of horseshoeing might seem as old-fashioned as a trip to Grandma’s house in a horse-drawn sleigh. But it’s a fact Thoroughbreds need shoes, and horses’ feet are in good hands with 29-year-old blacksmith Scott Rhone, who fell into the business like a baby bird from its nest. The son of trainer Bernell Rhone and Cindy Rhone, Scott got his start holding the front end of horses for his dad’s farriers when he was 7. Scott, a Minnesota native, is married to Brittany, a jockey who is the daughter of owner-trainer Lonnie Arterburn and Doris Arterburn. In their spare time (which is limited and precious), Scott and Brittany enjoy fishing, boating and hunting. They are prime examples of horse racing’s ability to attract enthusiastic, hard-working, horse-loving young people to its ranks.